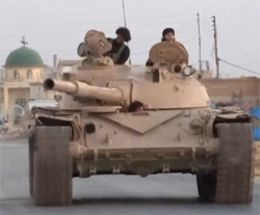 Today, according to CENTCOM, the U.S. has now added bombers and attack aircraft:

On August 14, 2014, I authorized the U.S. Armed Forces to conduct targeted air strikes to support operations by Iraqi forces to recapture the Mosul Dam. These military operations will be limited in their scope and duration as necessary to support the Iraqi forces in their efforts to retake and establish control of this critical infrastructure site, as part of their ongoing campaign against the terrorist group the Islamic State of Iraq and the Levant (ISIL).

The failure of the Mosul Dam could threaten the lives of large numbers of civilians, endanger U.S. personnel and facilities, including the U.S. Embassy in Baghdad, and prevent the Iraqi government from providing critical services to the Iraqi populace.

Pursuant to this authorization, on the evening of August 15, 2014, U.S. military forces commenced targeted airstrike operations in Iraq. I have directed these actions, which are in the national security and foreign policy interests of the United States, pursuant to my constitutional authority to conduct U.S. foreign relations and as Commander in Chief and Chief Executive. These actions are being undertaken in coordination with the Iraqi government

U.S. Central Command conducted these strikes under authority to support humanitarian efforts in Iraq, as well as to protect critical infrastructure, U.S. personnel and facilities, and support Iraqi security forces and Kurdish defense forces, who are working together to combat ISIL.

Here is President Obama's August 8 letter to Congress authorizing airstrikes. They were limited to:

These military operations will be limited in their scope and duration as necessary to protect American personnel in Iraq by stopping the current advance on Erbil by the terrorist group Islamic State of Iraq and the Levant and to help forces in Iraq as they fight to break the siege of Mount Sinjar and protect the civilians trapped there.

…In addition, I have authorized U.S. Armed Forces to provide humanitarian assistance in Iraq in an operation that commenced on August 7, 2014. These operations will also be limited to supporting the civilians trapped on Mount Sinjar.

Not to mention, much of the equipment we are now destroying was given by the U.S. to the Iraqis. So first we paid for it, and now we're destroying what we paid for. To make matters worse, the Kurds are complaining they don't have enough equipment, and want us to buy them more.

Here's a compendium with photos identifying the equipment ISIS has taken that was supplied by the U.S. and others.

Here is what the Kurds have.

Here are the Kurds today, en route to fight ISIS:

On a related note, ISIS was pounded today in Raqqa, Syria, where ASSAD forces launched its biggest airstrikes. But ISIS also fought back and caused damage. Here's a 4 minute video, take a look at their equipment. (Added: video has been deleted by You Tube. It’s now up on Vimeo here.)

Even Democrats are now calling for ground troops and stepped up attacks on ISIS. It's the wrong response and will cause untold U.S. and civilian deaths in Iraq. It also will put us at risk at home of attacks by ISIS sympathizers. A war is unlikely to contain ISIS.

In the Guardian today, an explanation of ISIS that is receiving a lot of praise among analysts and journalists on Twitter.

Isis is not a disease. It is a symptom – of a political vacuum, a sense of rejection among Sunnis, and an ideological shakeup within Salafism. It is important to emphasise, however, that there are grounds for optimism. While the strength and appeal of Isis should not be underestimated, its rise has triggered a unique debate in the region.

Since Isis took over large swaths of Iraq, in particular, Arabic media outlets of all types have produced reports about the nature of the group and the source of its ideology. There is a collective soul-searching in the region, coming from everyone from ordinary people to clerics and intellectuals. After the 9/11 attacks, such questions came from outside the region and were shunned as “imperialist” or “orientalist”. Today the voices are coming from within and are more powerful. Supporters of the group seek to ground its behaviour in Islamic traditions and object to the notion that its atrocities are anomalies.

I wrote about the disaffection and marginalization aspect here.

I still believe the Middle East needs to solve its ISIS problem. We will only make things worse.

Update: The video removed by You Tube is now available on Vimeo here.

Update: You Tube removed the video link for violence. I didn’t think it was violent or I wouldn’t have posted the link. It was about the guys in the photo at the top of this post driving down the highway in the tank, and some other shots of blowing stuff up.

Here’s a big screengrab of the tank from the video.

Charles Lister of Brookings said that ISIS honcho/enforcer Abu Waheeb (aka Wahib) was running the operation in the video, which would put him in Aleppo rather than in Mosul where some Kurds are claiming he was killed today. He’s a big deal — the scariest looking guy in ISIS, also known as the Desert Lion. He was imprisoned by the U.S. at Camp Bucca and then sentenced to death and moved to Tikrit, where he escaped with about 110 others in 2012. Supposedly, he got his training in prison.

If Waheeb is in Aleppo it could be significant because it likely means ISIS thinks northern Syria is important. Analysts say it would leave the Syrian rebels at a disadvantage, fighting Assad on one side and ISIS on the other.

I didn’t see Abu Waheeb full on in the video but I was able to grab this screenshot — I think he could be the person leaning against the truck. He dresses in black a lot and wears a beret-type hat. He must like being photographed, because he doesn’t cover his face, even when killing. Here’s another photo of him. And another.