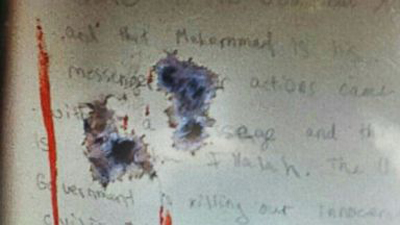 The Government responded to several of Dzhokhar Tsarnaev’s motions today. In its response to his motion to suppress statements, it reprinted what Jahar has scrawled while hiding inside the boat:

I’m jealous of my brother who ha[s] [re]ceived the reward of jannutul Firdaus (inshallah) before me. I do not mourn because his soul is very much alive. God has a plan for each person. Mine was to hide in this boat and shed some light on our actions. I ask Allah to make me a shahied (iA) to allow me to return to him and be among all the righteous people in the highest levels of heaven. He who Allah guides no one can misguide. A[llah Ak]bar!

The US Government is killing our innocent civilians but most of you already know that. As a [UI] I can’t stand to see such evil go unpunished, we Muslims are one body, you hurt one you hurt us all. Well at least that’s how muhhammad (pbuh) wanted it to be [for]ever, the ummah is beginning to rise/[UI] has awoken the mujahideen, know you are fighting men who look into the barrel of your gun and see heaven, now how can you compete with that. We are promised victory and we will surely get it. Now I don’t like killing innocent people it is forbidden in Islam but due to said [UI] it is allowed. All
credit goes [UI].

Stop killing our innocent people and we will stop.

The Government’s full response is here. What conclusions does it draw from the note?

This writing, which bears hallmarks of al-Q’aeda-inspired rhetoric, suggested that Tsarnaev might have received instruction from a terrorist group. In addition, the fact that Tsarnaev used the word “we” (i.e. “We are promised victory and we shall surely get it. . . . Stop killing our innocent people and we will stop.) suggested that others might be poised to commit similar attacks and that Tsarnaev was urging them on.

I think both conclusions are a stretch to say the least. There’s nothing in that note to suggest he was “instructed” or received training. I think it’s more plausible he is repeating what he read online at websites and watched in You Tube videos. I also don’t see where he suggests others are contemplating similar attacks. He clearly says in the beginning the “we” refers to Muslims — he doesn’t restrict it to radical Islamic terrorists.

In all, I think the note provides some support for the defense theory it intends to present in mitigation during the death phase that he was young, enamored of his overpowering brother and taking direction from him. The primary goal of the defense is to save Jahar’s life, not convince a jury he didn’t participate in the bombing.